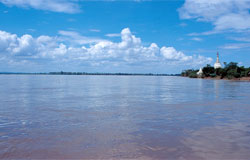 Compared to the Ayeyarwaddy, always considered the ‘Mother River’ of Myanmar, the Chindwin comes up short at 600 miles to the Ayeyarwaddy’s 1350 miles. However, she is the biggest tributary of the mighty Ayeyarwaddy and spills her strength into the longer river at a place not far from Mandalay, an old city that is the heart of Myanmar. What she lacks in length however, she makes up in spectacular scenery of lush jungles and sheer cliffs, misty-blue mountains and charming towns and villages, proudly running through a region of abundant natural resources and fertile meadows. Although the upper reaches are narrow and bordered closely with mountains, with few villages set far from each other the lower parts are more populated with mountains standing as a blue-purple backdrop in the distance.

The Chindwin Valley is a place of deep jungles and lofty mountains and thus it is somewhat more isolated than the plains by either side of the Ayeyarwaddy. Hence, the cultures of the inhabitants are more unspoilt, and the towns and villages lining the river have an otherworldly atmosphere even in this country seeped in ancient traditions. Their airy bamboo houses line narrow and shady lanes along which bullock carts ply goods and people. The compounds of their house are well swept, and filled with useful medicinal plants, fruit trees, and edible vines to put into soups. A pig or two feeds happily at their troughs, and lazy cats doze in the morning sun. The people’s lives are simple, but filled with goodwill for strangers and humour among themselves, a trait testified in the works of the marvellous Sambuddhai Temple of Monywa and the cave pagodas of Hpowintaung and Shwebataung.

Sambuddhai Pagoda The Sambuddhai has nearly 600,000 Buddha images of all sizes ranging from inch high to over seven feet. The pagoda complex covers a large area where refugees found sanctuary during World War II, looked after by the Abbot of the temple. The donation hall and other buildings apart from the main temple are massive two-storied buildings, charmingly covered on the exterior from ground to roof with large, coloured figures in high relief, depicting people going about their daily life. In a few niches figures of royalty or nobility hold up plaster placards warning the living pilgrims to have discipline or honesty. Whimsical touches can be seen in a husband apparently being scolded by his wife, or a brown plaster dog sneaking through a plaster door, only his hind legs and happy tail visible to the outside world.

In a separate prayer hall donated by the two Chinese brothers who made their fortune with ‘Tiger’ balm, their effigies stand at two corners looking on complacently at two larger than life plaster tigers clawing their way over a wall. They are the Aw Boon Haw Brothers who became millionaires and finally settled in Singapore. Out in a open compound, a group of women dressed to the nines in the fashion of the 1920s were just closing their silk parasols and chatting with each other: plaster pilgrims that have stood there since the Sambuddhai was built in 1940. 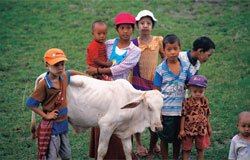 Overlooking this pagoda complex is a reclining Buddha image 333ft long set on a high hillside. It is the largest reclining image in the country as well as the most beautifully proportioned. The graceful arch of the eyebrows give the image an expression full of Metta, or ‘loving kindness’ that one must have towards all beings, according to Buddhist philosophy.

HpowintaungMore ancient than the Sambuddhai are the two cave pagoda complexes of Hpowintaung and Shwebataung, believed to be over 300 years old. There are almost one thousand caves in which both the Buddha images and the thrones were carved out of living rock. The natural shape of the caves was not changed too much, and 17th century wall paintings in exquisite detail cover the interior walls. The entrances are rimmed with traditional motifs of vines and flowers, in high or low relief. Figures of mythical beings and traditional design elements are seen both carved and painted.

Very near the Hpowintaung complex are the Shwebataung cave pagodas and here the high cliffs have been cleft into narrow passages that twist, turn, rise and fall through the solid rock, and with man-made caves lining both sides. The Shwebataung caves are not too deep but they have been carved wide and high. The entrances, unlike the carved details of Hpowintaung, have been constructed of brick and plaster and the painted stuccowork represents traditional motifs and celestials as well as a few western creatures such as unicorns.

Chindwin RiverIt is not only temples or landscape beauty that the Chindwin region is famous for: they also have a durable and elegant lacquer ware called ‘Kyauk Kar’, named after the town producing it in vast numbers. Only two colours, red and black, are used for this, and sometimes flowers are painted on the sides of fruit baskets or on trays, with deft fingers that finish a design in a few seconds.

Another fascinating aspect of the Chindwin region are the small towns and villages that give an insight into the way of life of these proud by friendly people. They are proud of their heritage, and while living with less material comforts, their integrity and faith in themselves give them the dignity of royalty. 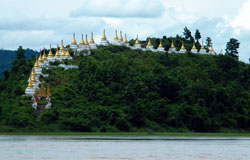 The town of Kani has been known all through Myanmar history as birthplace of learned nobles and wealthy merchants. The nearby Mahu Mountain Range is the location of the Alaungdaw Katthapa Wild Life Park where endangered tiger roam freely. The jungles are filled with rare and beautifully grained hardwoods such as teak, Pyingado and Padauk, as well as Thanakha, the tree with the fragrant bark grinded to a paste and used as a cosmetic and sunscreen. The most fragrant Thanakha comes from this area, and in old times such trees are kept aside only for the use of queens and princesses. The guardian of these trees were richly rewarded when they present the cut branches once a year to the palace.

The tiny Kin Village is a place of devout Buddhists who are proud of their wonderful monasteries, built both in traditional carved teak and in brick colonial styles. The wooden steps of the jetty are long, where children sit to watch the boats passing by. Water levels differ hugely between summer and monsoon seasons and the steps offer a grandstand view of the river.

Sunset at Chindwin River One enchanting town 40 miles upriver of Kin Village is called Mingin, with various temples and wooden houses that have stood for over a hundred years. The Min Kyaung or King’s Monastery is their pride of place especially as it houses old and beautiful Buddha images. Just a short ride away from Mingin is Kyidaw, where the Shwe Zawar Yaw Monastery is the prestige of the villagers. Shwe Zawar means figures painted out of gold leaf on a flat surface, and the monastery walls are covered with these in a rare example of this artwork, which is usually seen on small utensils such as lacquer bowls or trays. Yaw is the name of a large part of this region where fine hand-woven cotton or silk with distinctive designs are woven, and coloured in black or deep red with organic dyes. 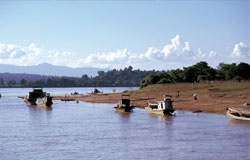 The Chindwin Valley people work hard in their fields, and the work is shared with friends helping each other when the labour of one is not enough. Girls transplant paddy seedlings or help with harvest in laughing, gossipy groups. For their lunch breaks, however meagre their meals, they all to share what they have. A walk through paddy fields connect Kyidaw and a small village named Kan Village, translatable as ‘Destiny’

The Kan villagers are always eager to show off their own beautiful monastery with wonderful gilt work on the walls and a spectacular carved ceiling lacquered red and decorated with gold. High pillars, also lacquered and gilded in places hold up the tapering sections of the roof. The exterior walls are dark with many layers of crude oil dregs that keep the wood insect and weather proof.

Chindwin RiverMyanmar Architecture has to follow rigid rules especially for religious or royal buildings. Laws for the common people have relaxed since the monarchy ended in 1885 but design elements used in religious buildings are still not permitted to be used in secular construction, such as the tapering tiered roof. The monastery in Kan Village is a prime example of a religious monument, enhanced by the old Buddha images. The robes of the image are symbolised by mere lines and not folds of the cloth, which marks the image as a work probably before or around the 18th century.

Kalewa is the trading post between Myanmar and India, and this town rests at the point where the Myit Tha River with its source in India joins with the Chindwin. Kalewa is right at the foot of the Western Mountain Ranges that loom over the town, the pagoda on the hill and the placid waters of the river. Apart from the monsoon season of June to October when rainfall can reach up to 60 inches, the market of wholesale and retail goods is a bustling place for traders of two countries to meet.

Towards the upper reaches of the Chindwin, the view on either side grows even more spectacular. The fertile green fields where cattle graze border the waters reflected with the deep blue of the sky. Misty blue and green hills rise high on the horizon, and near the village of Ma Sein, a row of 28 white-washed pagodas line the crest of a sloping hill and file down towards the river. The number signifies the 28 Buddhas that have brought enlightenment to the world. 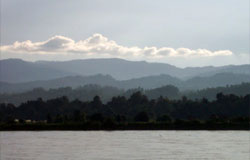 Chindwin RiverThe town of Mawlaik further upriver was once a centre of administration for the British government. Set on a hill, it is a pretty spot with old colonial style buildings and pretty houses. Offices as well as the guesthouse once called the ‘Dak Bungalow’ are still preserved and used. The cool weather must have been reminiscent of English springtime, and although undiscovered by the general public, it is a wonderful spot to get away from everything stressful. It was also a trading post for the colonial era enterprise the Bombay Burmah Company that dealt in teak, abundantly found in the area. It is said that timber elephants of this region to this day only understands commands spoken in English. As elephants live long, they might have worked during the colonial period or else they might have passed on language skills to their offspring: elephants are so smart it is surely not beyond their abilities to do so. 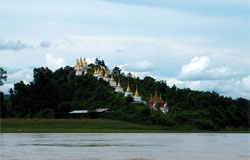 Pakhan-gyi is almost at the point where the Chindwin and the Ayeyarwaddy meets. It is an old city that flourished eight centuries ago, and although nothing more than a large town nowadays, one can see vestiges of its past glory in the old city walls.

All these old towns and villages survive in this modern day with deep-rooted cultures. The Chindwin River is often overlooked but the region she feeds is a land rich in minerals, jungles, wild life, old cultures and more so, people who are proud to live along her banks. She is a river worthy to be the pride of Myanmar, this beautiful and wilful lady of the wilds.